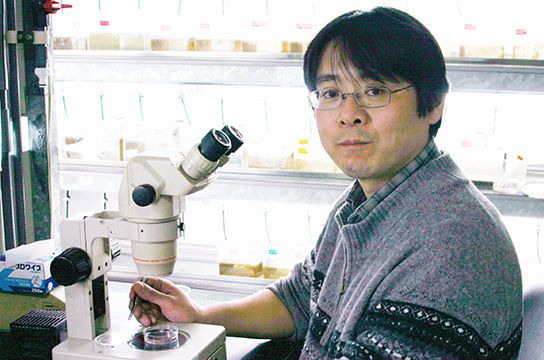 I have joined to the Department of Integrated Biosciences in 2003. I observed the daily life of medaka on the scale of medaka and in the time of medaka to study what would occur in medaka when they were in the International Space Station (ISS) and I have learned that medaka are living really like us. Medaka play, medaka identify themselves to each other. Medaka don't just spend their days just swimming, feeding, and laying eggs, but they live each day in their own way.
I learned another important lesson when we tried to take medaka to ISS. Medaka is a part of the Nature in Japan. Medaka is a part of a large, complex, dynamic system called ecosystem. We assume that each of us is living on our own, but we are wrong. As medaka and all other living organism, human is also a part of the ecosystem which is a complex and dynamic system in itself. In order for a dynamic system to continue to exist, it must continue to improve, even if it's very gradually. This is because a system which changes for the worse will always fail and can no longer exist. This is the reason why the complex and dynamic systems such as the living organisms and the ecosystem, is designed to keep getting better. As the parts of the ecosystem, the living organisms exist to make the system better. I want to be able to understand the life and the ecosystems from the standpoint of complex systems.

Following the example of many biologists and life scientists, I have always loved living organisms. I was particularly fascinated by the diverse, beautiful and bizarre forms of sea invertebrates, and became interested in learning about the principles of how they were created. When I was a graduate student at the beginning of the Heisei era (early 1990's), everyone read “Molecular Cloning” and you were not a life scientist if you were not a molecular biologist. Believing that changes in molecules related to fertilization should lead to the establishment of reproductive isolation and consequently should lead to speciation, I worked hard in the research to elucidate the molecular machinery of fertilization during my Doctoral student days, as a researcher in the 1st laboratory of Physiology of Dokkyo Medical University, and as a assistant professor in the 2nd Laboratory of Physiology of Tokyo Women's Medical University.
In 2003, I moved to the Laboratory of Genome Stability in the Department of Integrated Biosciences, where a collection of natural medaka populations was maintained. The medaka, Oryzias latipes, has been an Ace model in fertilization study with a long history used since before World War II. I was certain that there was diversification of fertilization-related genes among the natural medaka populations since medaka have a great genomic intraspecific diversity. To find the evidences for my hypothesis, I examined the PLCZ gene, which increases the calcium concentration in mammalian eggs immediately after sperm and eggs fusion and found that the medaka PLCZ gene was extremely well conserved in contrary to my expectation. It seems as if medaka strongly reject diversification of fertilization mechanisms.
I had no choice but to join the mainstream of the research in the Laboratory of Genome Stability, the study of biological effects of ionizing radiation (IR). Exposure of IR causes DNA damages, such as double strand breaks (DSBs). Cells repair the DNA damages very rapidly. However, the cells can never repair the damages 100% correctly, so the cells misrepair the DNA damages at a low probability (mutation). The first unicellular organisms were haploid (n) and they cannot correctly repair DSBs since they did not have a reference. So, they repaired incorrectly as a temporary measure. Consequently, mutations were accumulated in their “genome”. In order to eliminate harmful mutations, two haploid cells (with the same genome) might fuse and conduct homologous recombination between their DNA double strands. Then, they divided back into haploids. I would like to propose this is the origin of fertilization, sex, and reproduction (and this is the reason why we irradiate medaka, instead study fertilization of medaka).
Around 2007, we started the research project with JAXA (Japan Aerospace Exploration Agency) to study the biological effects of space radiation. We aimed to raise adult medaka in the International Space Station (ISS) and keep them for three months on the orbit. In order to understand "healthy medaka" as the ground reference, after many trials and errors, we came up with a method that we take videos of the movements of medaka with a video camera, track them with a computer and digitize and quantify. In Kanji character, animals are moving organisms. Animals are meant to move. If you are able to move without any problems, you are healthy: If not, you are unhealthy. An animal's physical and mental state is most accurately and acutely expressed in its movements, gestures, behaviors. Based on this understanding, we filmed the movements of medaka with a home video camera, quantified them with a laptop PC, to observe their behavior closely on the spatial and time scale of medaka. We knew the unknown daily life of killifish, and we finally understood the hidden daily life of medaka.
In March 2011, the Tsunami which followed the Great East Japan Earthquake caused the meltdown at TEPCO's Fukushima Daiichi Nuclear Power Plant, contaminating a wide area of East Japan with radioactivity. There is an urgent need to elucidate the impacts of chronic exposure to low dose and low dose-rate radiation at the individual animal level, which had not been a focus of radiation biologists. We and medaka have been working to elucidate the effects of 100 mSv gamma-ray irradiation by histological analysis, quantitative analysis of their behavior, and transcriptome analysis: no effects were found on the medaka tissues and behaviors, however, our results have been suggested that medaka body may be lacking antioxidant capacity when chronically exposed to low dose-rate irradiation. I believe this research to be our responsibility who has been involved in radiation biology using electric power supplied from the Fukushima nuclear power plant.
In the aftermath of the nuclear power plant accident, Kashiwa city was pressed as a “hot spot” for radioactive contaminated, and the intense reputational damage led to a complete loss of sales of Kashiwa-produced vegetables. A local inventor has assembled an ultrasonic cleaner for washing vegetables, and he and I began the joint research on ultrasonic cleaning of various foodstuffs. When spinach and other leafy greens were ultrasonically cleaned, they became more vigorous, ethylene signaling was suppressed, and shelf life was increased. When salted mackerel fillet was treated with ultrasonic waves, the oxidized lipids on the surface were removed and the original flavor of the fresh mackerel was restored. The reason why aged and oxidized food tastes bad is because your body is telling you not to eat it, because if you eat it, your body takes oxidative stress orally, and your body's oxidation/reduction balance will tilt to the oxidizing side. This finding led us to believe that eating fresh (not oxidized) food must be able to improve the lack of antioxidant power when chronically exposed to low dose and low dose-rate irradiation.
My dream is to use ultrasonic cleaning to wash away the dirt including radioactivity, residual pesticides and additives, and the oxidized lipids, so that all Homo sapiens and all other domestic animals (including Oryzias latipes in our laboratory) can eat the delicious (= good for health) foods they should to eat and need to eat and live a healthy and happy life.