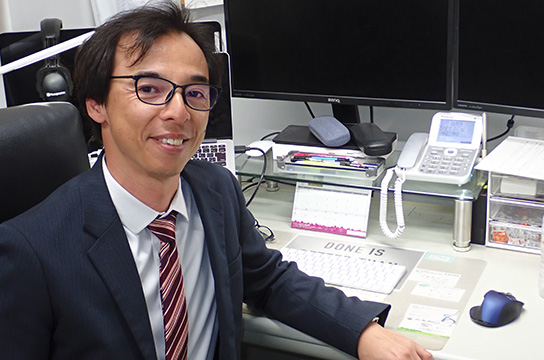 Love between men and women is the most attractive to human beings, and it is no exaggeration to say that meeting the ideal man and the ideal woman is the greatest concern of life. On the other hand, men and women sometimes fight fiercely and it seems hardly difficult to sympathize with each other. Looking back on the history of humankind, most of it is the history of gender inequality, and various efforts are still being made toward the achievement of a gender-equal society. Why does such a dilemma arise where men and women are strongly attracted to each other but also fighting fiercely with each other? I think we can find the answer by studying how the sex differences between males and females are created, and how the mechanism has evolved.

The year I knocked on the door of the laboratory as a graduate student was the year when the human sex-determining gene SRY was identified. At the same time, that year was also the year when it was revealed that sex differentiation in Drosophila is regulated by a series of alternative splicing cascades of sex-determining genes. I was fascinated by the fact that the function of a single gene drastically changes sex, and that alternative splicing, a molecular-level switch, is linked to an individual-level sexual dimorphism. When I was an undergraduate student of the Faculty of Agriculture, Tokyo University of Agriculture and Technology, the research material I handled was the silkworm. It was known that the sex of the silkworm is determined by the locus named Fem on the W chromosome. Thus, I decided to identify the Fem in the silkworm. My undergraduate thesis topic was studies on the egg size-determining gene located on the Z chromosome of the silkworm. After enrolling in the graduate school of the Graduate School of Agriculture, the University of Tokyo, I newly identified two Z chromosome-linked genes from the silkworm genome and studied on dosage compensation of the sex-linked genes in the silkworm. After obtaining a PhD, we identified a silkworm ortholog of a sex differentiation gene by comparative genome analysis and proved its function by creating transgenic animals. Furthermore, we discovered novel sex-determining genes by biochemical strategies and revealed that the silkworm has a unique sex-determining mechanism not found in any other organisms. After becoming an associate professor in this department, I finally succeeded in identifying the long-sought Fem gene. The Fem yields a small RNA called piRNA with only about 20 bases, and the discovery that piRNA controls sex determination attracted much attention at that time. My research findings, which revealed the sex-determining genes unique to the silkworm, are pioneering cases suggesting possibility that sex determination mechanism shows a surprising diversity beyond our expectations. After that, unprecedented sex-determining mechanisms and novel sex-determining genes were reported one after another, and it became clear that sex-determining mechanisms showed more diversity than expected. Why is there an incredible variety of mechanisms governing sexes, which are quite universal for all multicellular organisms? Perhaps it is because the sex-determining mechanism is not only necessary for sexual differentiation, but also has other important implications for living organisms. Then, what is its significance? We are currently conducting research to unravel this mystery.