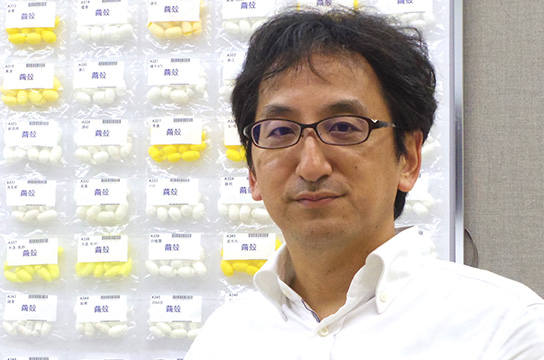 Insects are rich in diversity, but the mechanisms that give rise to this diversity remain a mystery and an underutilized resource. My aim is to understand the capabilities and diversity of silkworms and other insects at the molecular level, to enable "insect design" to modify insects, and to use the designed insects for basic research and industry. The sericulture industry, which once supported Japan's economic development, is now on the verge of extinction, but we are currently working on a "sericulture revolution" to rebuild it into a new industry by combining advanced sericulture technology with new biotechnology.

I have loved insects since I was a child, attracted by their coolness, size, beauty and curiosity, and have always been interested in the diversity of insects. I am particularly fond of stag and dragon beetles. I still go out to collect them, not only as a hobby but also to use them as research materials. It is a pity that I can only go collecting a few times a year, but I feel happy that my work allows me to go collecting in various places. At university, I belonged to a course on population genetics of Drosophila and studied the molecular evolution of transposons, which can bring evolutionary change in organisms. Later, during my postdoctoral fellowship, I studied the cocoons/silks of various insects and spiders to study the genetic diversity in the adaptation to their environments, and I also participated in a large-scale mouse mutagenesis project using chemical mutagens to study the effects of point mutations on individual phenotypes. After that, I decided that I still wanted to do research on insects, so I have been working on silkworm transposon mutagenesis, identification of responsible genes of existing mutants using silkworm genome information and transgenic technology, and development and commercialization of new functional silks and recombinant proteins using genetically modified silkworms. Recently, the technologies of Next-Generation Sequencing and genome editing have become available, and I would like to somehow realize the insect design even partially.